Bring out your dead…

Although it has been a long time coming, I finally have the time to write about plants that died this winter…just in time to write about the ones that are now struggling with summer heat.
Which brings up an interesting question I had someone ask me the other day…”Are the zones that you see on plants as important when the go higher as when the are lower?” And the answer is…Yes. But more on that later.
This last winter was difficult at best. For gardeners in the northwest that are accustomed to a temperate year round climate, the horrific cold we had this winter really tested the limits of plants and gardeners alike.
My original thought was to give a list of plants that had died, tell you which ones I replaced and why and which I gave up on. But quite frankly the list was far too long. So I decided to write about a few that either really saddened me by their demise or ones that truly surprised me as to why they did not make it.
The first and most surprising to me was my Ceanothus. This lovely evergreen shrub had actually become a small tree. Having been in for several years I did not think twice about it not surviving…however, it did not. Other smaller and more newly planted species did but not my Ray Hartman. I did do a hard prune on it last year but it had already begun a healthy amount of re-growth. So my analysis is that because I had pruned it so hard it had less protection from the winter’s harsh weather and thus the added stress caused it to expire…much to my chagrin. I replaced it with a beautiful variety of Eucalyptus.
Another plant that caused me great consternation was a South African shrub that for the life of me can’t remember, nor find, the name! It was planted four years ago and was not suppose to be hardy here. The evergreen leaves were delightfully fragrant. As it had survived for so long I was confident it would make it. And it did…until a month ago. New growth had sprung abundantly from it and I thought,’ wow…this puppies gonna make it”. It didn’t. I noticed three weeks ago the new leaves were wilting. With in a few more days they were completely flat against the stems. The only explanation for this I can come up with is that the plant had stressed too much, lost the majority of its root system and even though it started to grow, it did not have the roots to accommodate and sustain new growth. I dug it up and shed a silent tear…I replaced it with nothing as it was a very full bed anyway. I would try it again if I can ever find its name in my plant name cookie jar. Yep, I keep all my tags in a cookie jar.
I was very saddened by the loss of my Chamaecyperis ‘blue surprise’. Fortunately I have two and only one expired. I for the life of me can’t figure out why. You may have heard that these plants were not terrible hardy in the sense of their root systems but the growers did come up with a new grafted one that does seem to hold up better. Both of these were that newer kind. And as only one died and one survived just fine…I got nothing on what happened.
Coleonema pulchrum is a tropical feathery small shrub with wonderful fragrance. The blooms, which are nice too, do not have so much fragrance but brush by the foliage and…wow. My entire hedge of these beautiful plants died. They had been in for about 4 years, I put in wax leafed begonias for this year because I really want to replace Coleonema but have not decided if it is worth the risk yet.
So as not to end on a sad not I wanted to tell you of a few fantastic surprises. My Buddleia ‘Kews Red’ which I thought was dead for sure came back from the roots. I am especially thrilled about this because all Buddleias are quickly becoming illegal to sell in Oregon as some people believe it is extremely invasive as it can reseed prodigiously in the right environment.
Also, Colquhonia coccinea, leafed out very late spring. I was almost certain this woody member of the salvia family would not make it, but much to my pleasant surprise it did. It has such soft grey green leaves that are eclipsed in beauty only buy the salvia shaped, large orange-red blooms in summer.
So there you have it. More importantly than anything else to me is that new gardeners realize that ALL of us have success and failures every year. Even though I have been in this game many, many seasons, each season is fraught with new experiences. Some make me sad as I see plants I adore vanish silently into oblivion. Other experiences bring me ecstatic pleasure as I realize…’you made it, Yeah!’ And it is always eventually big fun to find and try new plants, testing the water with some and having a certainty with others, for success.
Whatever your proclivity for gardening, keep trying. It will always reward you with some experience that will, as you help your garden grow, help you grow as well.
Happy Gardening,
William
Posted by Garden Time at 1:30 PM No comments:

For some, summer began on Memorial Day, others when school finished! But for a small group the 4th of July is the true 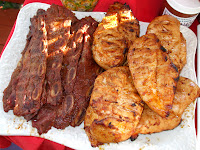 beginning of summer. Why? Because it only starts getting hot in July. And boy has it gotten hot! The heat has chased everyone out of the kitchen. So to the grill we go! We have finished about half our shows for this 4th season and we often mark the half way point with a stop at Gartner’s Meats. 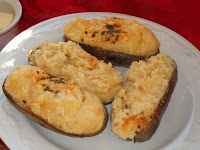 Short ribs, chicken and kabobs are in the freezer and ready for a quick dinner. Don't forget the twice baked potatoes! We have spent most of the spring working in the garden (or shooting stories for the TV show). Time to relax, before we start working on the next series of shows. I’ll be planning the next show after I finish eating…

We also would like to remember Jack Gartner who passed away just a few weeks ago. What a great businessman and a nice gentleman.
Jeff
Garden Time Producer
Posted by Garden Time at 6:47 PM No comments: