I have traveled a fair amount over the past 25 years.
I love to visit different places & see how people live their lives. I enjoy walking in neighborhoods, far from the touristy sites. I want to see the similarities & differences of where the real people live. 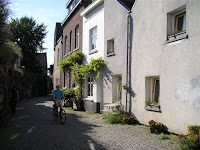 Being a plant person, I always have noticed the plants people grow in their gardens or front doorstep.
It must be in our genes, our DNA to keep plants surrounding our living space.
Last year, I enjoyed Therese & Jeff's blog & photos of their trip to Italy.
My favorite photos were from Venice. The city is surrounded by water & yet everyone has potted geraniums on their balcony!
On my trip to Amsterdam this summer, I again was impressed on the gardens of this very urban city. 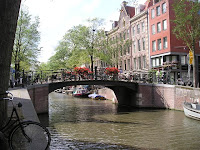 There were flower boxes on the pedestrian bridges!
Wisteria & climbing roses erupt from the cobblestone pathways in front of houses. They look ancient. 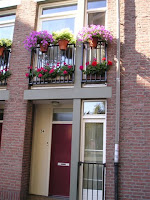 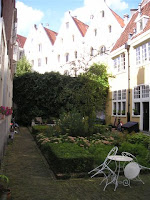 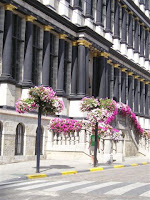 The Civic building in the photo is awesome with hanging baskets & railing plantings of petunias.
Looks like a few buildings I know in Portland.

In smaller cities like Edam, I saw gardens with a bit more size than the small spaces of Amsterdam. 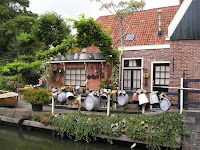 One garden was bursting with plants & adorned with whimsical pieces of Dutch nostalgia.
I loved the use of old wooden shoes & wash pans. It was funny & pure Holland. 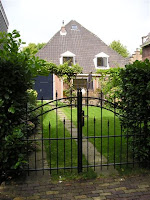 The garden beyond the iron gate frames a beautiful home. It seems such a peaceful space.

All of these gardens make me think that the world over, we are all the same inside. Gardeners!

Fall is a great time to get outside. When the rain and cooler weather is chasing everyone indoors you can still get outside and enjoy the garden and many other events around the area.

Right now there are lots of Harvest festivals happening around the area. In the past few weeks we have visited a bunch of cool ones including the one at Bauman’s Farm and Garden where they had the giant pumpkin weigh-off and tons of fun every weekend until the end of the month. This past week we found the really neat harvest festival at French Prairie Gardens. The F

rench Prairie festival had the very fun and exciting pig races… something you can’t miss, but be prepared for the ‘pig’ jokes, there are some real groaners.
If you are not a ‘harvest’ type of person, you can still enjoy fall. Check out these pictures that we captured in our garden and at the local garden center. 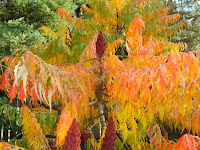 The color is tremendous this season… check out the sumac. There are new varieties that are out there, but they all share this wonderful color. 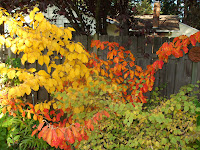 The witchhazel is also showing off with striking color and even the hosta has one last blast of color before the leaves die off. 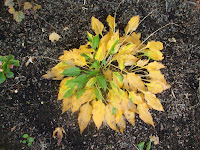 Finally we found this euonymus (also called Burning Bush) with 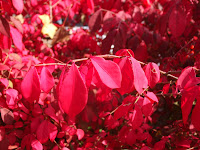 See there are lots of reasons for stepping outdoors and, after all, we are Oregonians (and Washingtonians) and a little rain never hurt anyone.

This Summer I was very lucky & with permission from the Garden Time gang, I went off on vacation to The Netherlands or as most of us call it - Holland. My family converged on my niece's house in Amsterdam. Not only was I seeing my sister & her family, but my Mom was along too.
Family & gardens what a combo. We had a blast!
Holland is a kind of the holy place for gardeners as it's where so much plant breeding is done 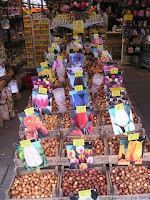 today. It's also the birthplace of plant geeks. Tulipmania happened in 1637. Tulips were the newest flower in Holland brought there from Turkey. The wealthy class had to have the beautiful new flower bulbs & there was a spending spree. Where else in the world would tulips sell for more than 10 times the annual income of a skilled craftsman of the time.
The bottom of the market eventually fell out. Another flower probably turned their heads.
Unfortunately, it is not tulip flower time in August but bulbs were for sale everywhere.
Someday, I hope to visit Keukenhof Gardens in April & see the 5 Million, yes 5 Million blooming tulips.
Holland is a wonderful country to visit in the summer. 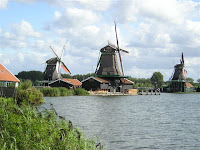 It reminds me of Oregon with it's very green landscape & varied crops growing across the countryside.
On farms, canals are used for irrigation water. The beautiful windmills of The Netherlands were used to pump this water, mill grain & keep the sea at bay. There are few original windmills left in rural areas. We visited an historic village called Zaanse Schans that had several working windmills.
Amsterdam reminds me of Venice, Italy as there are canals every 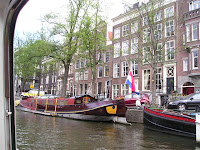 where.
The canals were the roadways of earlier days. Now they are for tourist boats
and resident's houseboats. How cool but to live on a canal in the heart of Amsterdam on a boat.
These houseboats are as varied as houses on a regular str 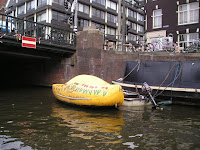 eet.
There are brown & green, new & old houseboats and even floating wooden shoes. 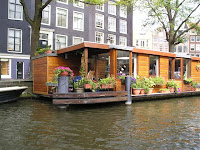 My favorite houseboats were the ones that had gardeners aboard.
The craving to garden even hits these water dwellers.
Most house boats had a container of geraniums or potted palm. Many houseboats had whole flower beds.
There were even the busy gardener's bed of weeds. I felt at home! 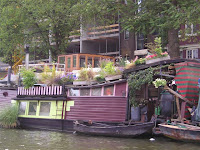 My family was very patient with me & let me visit gardens and garden centers. I will have a few more blogs and photos in the next few weeks.
Take care,
Judy
Posted by Garden Time at 9:22 PM 2 comments: